Q and A with Dr Ruth Nduati, University of Nairobi 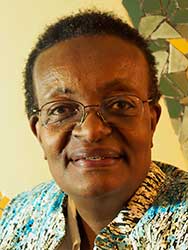 Photo courtesy of Dr. Ruth Nduati
Ruth Nduati, M.B.Ch.B., M.Med., M.P.H.
“Fogarty training has given us Africans the skills we need to conduct research, document the illness and look at possible interventions that work in Africa.
“There are people who are alive today because of Fogarty's input in terms of capacity-building, both in America and around the world.
“Just think about it: the first cases of HIV were described in the early ‘80s, and in just over 30 years, we are talking of eliminating mother-to-child transmission of HIV on the African continent.
“Fogarty has changed the face of HIV medicine.”

Dr. Ruth Nduati is a globally recognized authority on preventing mother-to-child transmission (PMTCT) of HIV. The former chair of the University of Nairobi's Department of Pediatrics, she has also led the Network of AIDS Researchers in Eastern and Southern Africa, which delivers PMTCT services to more than 100,000 women, and served as an advisor to the WHO and Kenyan Ministry of Health. Nduati earned her master's in public health at the University of Washington with Fogarty support and has led and collaborated on numerous research projects backed by the CDC and NIH.

How has Fogarty shaped your career?
Fogarty was instrumental in helping me rise from humble beginnings - I was born in a mud hut in rural Kenya - to become a physician and university professor. I went to the University of Washington in the early 1990s with support from Fogarty's AIDS International Training and Research Program, and not only earned my master's in public health but expanded my career horizons from being mainly a clinician to doing research. I learned how to write a proposal and conduct a study, and was able to delve deeply into questions that are relevant to Kenya. I also formed life-long friendships with colleagues at the University of Washington, which nurtured the research creativity of the team. I still use the skills I acquired through that Fogarty training to mentor students at the University of Nairobi, several of whom have gone on to build careers in research and are making significant contributions to the field of HIV medicine.
My ties to Fogarty and NIH have also continued over the years. Through Fogarty's Medical Education Partnership Initiative (MEPI), I'm collaborating with two U.S. universities to build clinical and research capacity in Kenya, and I've led or collaborated on several other research projects, mainly covering PMTCT and HIV prevention, supported by the NIH and the CDC.
How has your research helped to fight HIV/AIDS?
HIV interventions that are used in Kenya and globally are the result of our research. These interventions have helped change the AIDS epidemic from a death sentence for children and their mothers to the point where, in Kenya, we have almost eliminated mother-to-child transmission of HIV. One of the first studies I was involved in, in the 1990s, was a randomized clinical trial that looked at breastfeeding and formula-feeding of babies of HIV-infected women. Among that study's findings was that HIV-infected mothers who were breastfeeding had a three-fold greater risk of dying than other mothers. That result served as the impetus to provide antiretroviral treatment for all pregnant and nursing women in Kenya, which led to a drop in maternal deaths, which in turn meant fewer children were orphaned. We now provide lifelong antiretroviral treatment to all pregnant and breastfeeding women living with HIV, and we've reached a point where we are able to not only protect breastfed infants who are exposed to HIV, but also to keep their mothers alive.
What role has Fogarty played in achieving those successes?
Fogarty training has given us Africans the skills we need to conduct research, document the illness and look at possible interventions that work in Africa. There are people who are alive today because of Fogarty's input in terms of capacity-building, both in America and around the world. Just think about it: the first cases of HIV were described in the early ‘80s, and in just over 30 years, we are talking of eliminating mother-to-child transmission of HIV on the African continent. Fogarty has changed the face of HIV medicine.
What challenges lie ahead?
We have a very ambitious goal of eliminating mother-to-child transmission of HIV, and are involved in research work that is looking at how to strengthen the health care system to be able to deliver services that help achieve that goal. But there are roadblocks, including an increase in the number of Infections in women aged 15-24 years. Our research has shown that interventions, like condom-use, that work with older adults, don't seem to work as well with younger women. Condoms need to be used every time people have sexual intercourse to protect against HIV, but teenagers don't do that. We've applied for NIH funding to work with 10- to 14-year-olds and their parents on a behavioral change intervention, which involves teaching parents how to communicate to their children that they need to protect themselves.
Another challenge is that, although we provide antiretrovirals, not everyone takes them. We are conducting research to try to find out how we can narrow the number of women who walk away from the services we offer.