Market Saturation and Utilization Data Tool
The Centers for Medicare & Medicaid Services (CMS) has developed a Market Saturation and Utilization Data Tool that includes interactive maps and a dataset that shows national-, state-, and county-level provider services and utilization data for selected health service areas. Market saturation, in the present context, refers to the density of providers of a particular service within a defined geographic area relative to the number of the beneficiaries receiving that service in the area.
The seventh release of the data tool includes a quarterly update of the data to the fourteen health services areas from release 6, and also includes Federally Qualified Health Centers and Ophthalmology data. Release 7 will therefore include seven, twelve-month reference periods and the following health service areas: Home Health, Ambulance (Emergency, Non-Emergency, Emergency & Non-Emergency), Independent Diagnostic Testing Facilities (Part A and Part B), Skilled Nursing Facilities, Hospice, Physical and Occupational Therapy, Clinical Laboratory (Billing Independently), Long-Term Care Hospitals, Chiropractic Services, Cardiac Rehabilitation Programs, Psychotherapy, Federally Qualified Health Centers, and Ophthalmology. Also new to Release 7 is a trend analysis graphing tool that allows users to graph the percentage change and trend over time at the national level for the available metrics and health services areas.
The Market Saturation and Utilization Data Tool is one of many tools used by CMS to monitor and manage market saturation as a means to help prevent potential fraud, waste, and abuse. The data can also be used to reveal the degree to which use of a service is related to the number of providers servicing a geographic region. Provider services and utilization data by geographic regions are easily compared using an interactive map. There are a number of secondary research uses for these data, but one objective of making these data public is to assist health care providers in making informed decisions about their service locations and the beneficiary population they serve. The tool is available through the CMS website at: https://data.cms.gov/market-saturation. Future releases may include comparable information on additional health service areas.

The Market Saturation and Utilization methodology is different from other public use data with respect to determining the geographic location of a provider. In this analysis, claims are used to define the geographic area(s) served by a provider rather than the provider’s practice address. Further, a provider is defined as “serving a county” if, during the 12-month reference period, the provider had paid claims for more than ten beneficiaries located in a county. A provider is defined as “serving a state” if that provider serves any county in the state.

The Market Saturation and Utilization methodology is also different from other public use data with respect to determining the number of Medicare beneficiaries who are enrolled in a fee-for-service (FFS) program. In this analysis, a FFS beneficiary is defined as being enrolled in Part A and/or Part B with a coverage type code equal to “9” (FFS coverage) for at least one month of the 12-month reference period. There must not be a death date for that month or a missing zip code for the beneficiary so that the beneficiary can be assigned to a county. Other public use data may define a FFS beneficiary using different criteria, such as requiring the beneficiary to be enrolled in the FFS program every month during the reference period.

The Market Saturation and Utilization Tool does not include information on market saturation and utilization for Medicaid or private insurance. However, the Medicare information included in the Tool may be a useful proxy for researchers or providers in these markets. 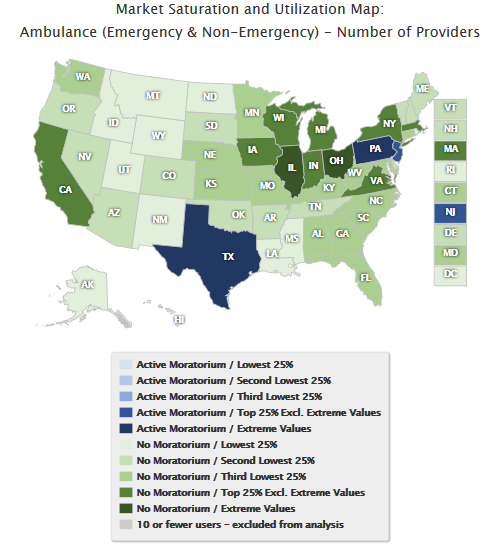 Map 2 drills down to the county level and displays the distribution of providers by county within the State of Texas for the October 1, 2014 through September 30, 2015 reference period. The dual color scale distinguishes between moratoria (blue) and non-moratoria counties (green).
Map 2. Ambulance (Emergency & Non-Emergency):
County Distribution of Number of Providers
October 1, 2014 – September 30, 2015
Color by Moratoria Status 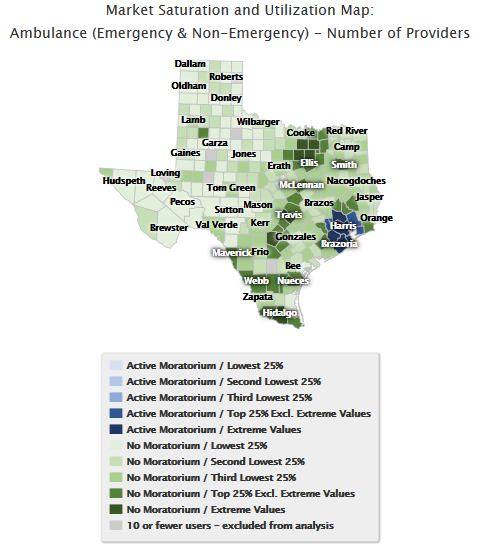