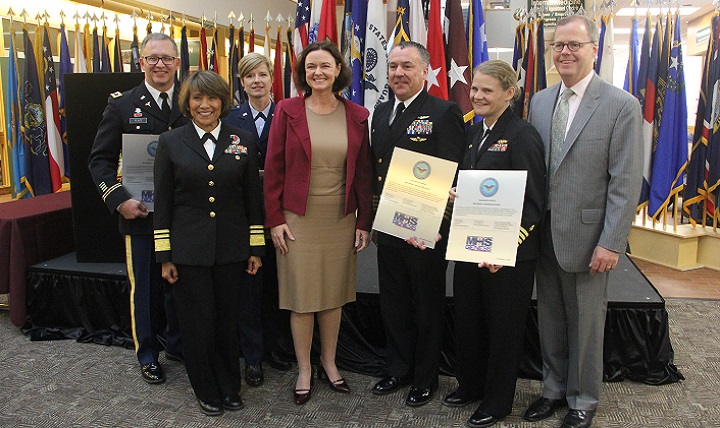 
JOINT BASE LEWIS-MCCHORD, Wash. — Hundreds gathered in the medical mall at Madigan Army Medical Center Nov. 15 for the MHS GENESIS Recognition Ceremony to commemorate the deployment of the Department of Defense’s new electronic health record at its four initial fielding sites in the Pacific Northwest.
“This is an exciting milestone for the Department of Defense, the Military Health System and, most importantly, our service members, veterans and their families,” said Stacy A. Cummings, program executive officer, Program Executive Office, Defense Healthcare Management System. “We have a responsibility to provide the best possible user experience to our beneficiaries and health care providers. We are delivering on that responsibility.”
The hosting organization, Madigan, was part of the first wave of military treatment facilities to begin using MHS GENESIS as part of the initial operational capability for the system. In October, it joined other military organizations in launching the new system to include Fairchild Air Force Base who went live in February, Naval Health Clinic Oak Harbor in July, and Naval Hospital Bremerton in September.
MHS GENESIS provides a single, integrated medical and dental record for inpatient and outpatient encounters across the Military Health System. It will support the availability of electronic health records for more than 9.4 million DOD beneficiaries. Once MHS GENESIS is deployed DOD-wide, only one electronic health record system will be used for the first time ever, and all patients will be able to receive care anywhere, anytime knowing their health records will follow them.
“The most important reason all of us are gathered here today are the 9.4 million men and women whose health care is entrusted to us. And we believe this electronic health record will help us support and advance that health care,” said Thomas McCaffery, acting assistant secretary of defense for Health Affairs.
According to McCaffery, the department chose a “high-performing, off-the-shelf commercial system” to take advantage of the progress that civilian health organizations have made in health information technology. That progress coupled with an eye on the “unique elements of our military” – from readiness and cyber security requirements to the culture in military health care – will make MHS GENESIS like no other electronic health record, he said.
“We’re taking the very best of civilian health care and adapting it to the unique elements of our military,” McCaffery said. “Above all, it is critical to our readiness mission. It will serve as our health record in the deployed environment. It will be connected with our medical facilities back at home and follow our service members and their families through their entire length of service with the military and beyond.”
Navy Vice Adm. Raquel C. Bono, director, Defense Health Agency, echoed the sentiments of Cummings and McCaffery, adding that the leadership and dedication of staff at the IOC sites was pivotal to the deployment of MHS GENESIS.
“It’s hard to believe that almost nine months to the day we started out at Fairchild. The progress we’ve made in that time has just been remarkable,” Bono said.
The comprehensive training, attention to detail and steadfast, razor focus on patient safety by the IOC sites, Bono said, is what is allowing the MHS to design the safest, most effective system possible.
Three of the four IOC sites – Oak Harbor, Bremerton and Madigan, who also oversees the Air Force’s 62nd Medical Squadron Clinic – are members of the Puget Sound Military Health System, an integrated medical market that includes Army, Navy and Air Force facilities and provides care to more than 288,500 beneficiaries in the region.
“We deliberately chose a market to deploy MHS GENESIS. We chose the Pacific Northwest because you had the variety and diversity of functions and services that we needed in order to fully build a test case and test run our new MHS GENESIS,” Bono said. “So this is a very deliberate effort to have full visibility and comfort of all of the modules within MHS GENESIS.”
Madigan was the first Army MTF and first major military medical center to field MHS GENESIS. It is expected that Tripler Army Medical Center in Hawaii will likely be the last, giving the two medical centers that are part of the U.S. Army’s Regional Health Command-Pacific the distinction of opening and closing out fielding of the DOD’s new electronic health record.
RHC-P’s deputy commanding general Army Brig. Gen. George Appenzeller is also the Puget Sound MHS market manager, allowing more seamless leadership integration and oversight as the system rolls out.
During the ceremony, Bono presented awards to each of the MTF site commanders: Air Force Col. Michaelle Guerrero, commander, 92nd Medical Group at Fairchild; Navy Capt. Christine Sears, commanding officer, Oak Harbor; Navy Capt. Jeffrey Bitterman, commanding officer, Bremerton; and Army Col. Michael Place, commander, Madigan.
Other distinguished speakers providing remarks during the ceremony included Army Maj. Gen. Willard M. Burleson III, commanding general, 7th Infantry Division; Navy Vice Adm. C. Forrest Faison III, Navy Surgeon General; and Army Maj. Gen. Patrick D. Sargent, deputy commanding general-operations, Army Medical Command/Office of the Surgeon General.
The DoD Healthcare Management System Modernization contract was awarded to Leidos, Inc., for $4.3 billion in the summer of 2015. Fielding to IOC sites took place throughout 2017. With IOC complete and review of lessons learned ongoing, deployment at future sites is expected to begin after a thorough review through 2018. Fielding to all Military Health System garrison sites is expected by 2022.
“During the next few months, we will continue to work with providers at our initial fielding sites to improve MHS GENESIS deployment, training and change management activities in preparation for full deployment decision later in 2018,” Cummings said. “We remain confident that MHS GENESIS will transform the delivery of health care and advanced data sharing through a modernized electronic health record for service members, veterans and their families.”
Disclaimer: Re-published content may have been edited for length and clarity. Read original post.

Military members have different jobs than their civilian counterparts, but how and why they get medical treatment for themselves and their families are quite similar
Recommended Content:
MHS GENESIS
Publicado por salud equitativa en 7:04