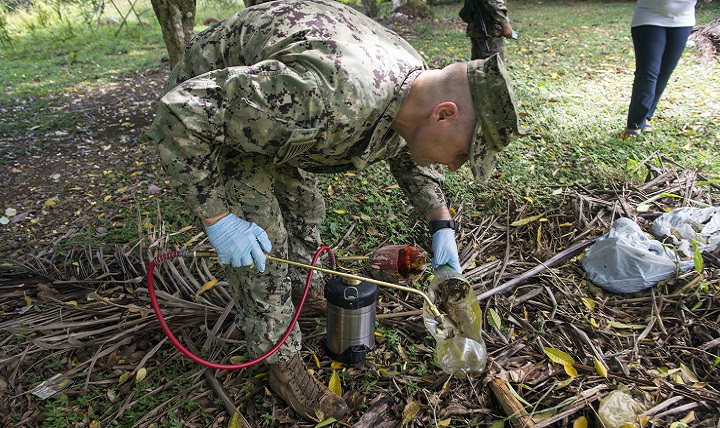 
PORTSMOUTH, Va. — The principal tasks of the malaria reduction efforts directed by the President's Malaria Initiative include distributing insecticide-treated bed nets, indoor residual spraying and anti-malarial drugs. While the United States Agency for International Development oversees the initiative, the Centers for Disease Control and Prevention is tasked with providing scientific and technical leadership as well as implementing public health programs vital to stopping malaria.
Recently, the Navy Entomology Center of Excellence has taken an important role in furthering the PMI’s goals to reduce malaria.
“Navy entomologists work around the globe supporting research and vector control programs that enhance the force health protection of U.S. and partner militaries as well as the general public health of host countries we operate in, so it’s a natural fit for NECE” said Navy Capt. Jeffrey Stancil, commander of the NECE.
“Navy entomologists stationed at the CDC have been involved with PMI for several years,” he said. “At NECE, we are honored to have been asked to join this team battling the world’s deadliest foe and support the United States Africa Command and Navy Medicine’s Global Health Engagement missions, develop partnerships across the GHE spectrum and ensure the operational readiness of our own personnel.”

In July, NECE entomologist Navy Lt. Cmdr. Joseph Diclaro was selected to serve as the PMI entomology consultant for Uganda working closely with both the CDC and the Ugandan Ministry of Health to ensure that bed nets are being effectively distributed and IRS is properly exterminating mosquitoes.
Before he was at the NECE, Diclaro was stationed at Navy Medical Research Unit 3 in Cairo and Accra, Ghana, for five years where he studied vector-borne disease throughout West Africa. During the 2014 Ebola outbreak, he was instrumental in overseeing the Navy’s response in Liberia working directly with the Minister of Health and the Liberian Institute for Biomedical Research.
Since his appointment to PMI, Diclaro has already made two extended trips to Uganda to provide technical expertise to the Uganda National Malaria Program. On his last trip, he worked with Ugandan Ministry of Health vector control officers for an annual insecticide resistance study that provides critical data to determine the best insecticide to use for IRS operations. While in-country, he trained 40 nursing students at the Arua School of Comprehensive Nursing and Midwifery of Uganda on mosquito biology and control.
Since malaria mortality has decreased as a direct result of the program, USAID recently added five new countries to PMI -- four of which are Francophone. This has led to a critical need for French-speaking entomologists and another opportunity for NECE to contribute.
NECE entomologist Navy Lt. Matthew Montgomery has recently been named the PMI entomology consultant for Cameroon. In addition to his proficiency in French, Montgomery brings years of operational and GHE knowledge to the PMI. In the last two years at NECE, Montgomery has worked to enhance vector control programs in Fiji, Micronesia, Haiti, the Dominican Republic and Liberia.
Both Diclaro’s and Montgomery’s roles in the PMI will allow them to build important personal relationships with public health workers in their respective countries and to develop long-term local expertise. Their impact on both Cameroon and Uganda will be measured in malaria case reduction and, consequently, the number of lives saved.
Disclaimer: Re-published content may have been edited for length and clarity. Read original post.

In the fight against global health threats, DoD is working with national and international partners to ensure service members are protected against risk of infectious diseases, viruses, and illnesses.
Recommended Content:
Global Health Engagement | HIV/AIDS Prevention and Treatment

In 2016, 57 service members were diagnosed with or reported to have malaria from 25 different medical facilities in the U.S., Afghanistan, Germany, Korea, Djibouti, and Oman.
Recommended Content:
Armed Forces Health Surveillance Branch | Malaria

Inside the Washington, D.C., beltway, scientists and researchers at the Naval Medical Research Center work diligently to combat malaria for the American war fighter and the global population.
Recommended Content:
Mosquito-Borne Illnesses | Malaria

The intersection of health and security: The value of Global Health Engagement