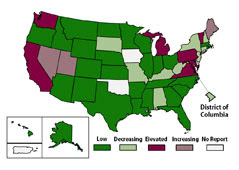 October 5-11, 2014. See larger image and details of activity in states of EV-D68-like illness.
*Investigations are ongoing; CDC will review and update available data every Thursday, starting next week.

What CDC Is Doing about EV-D68