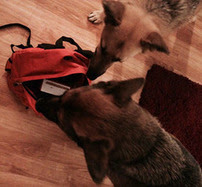 The Kansas Department of Health and Environment uses a four-legged friend to bring preparedness planning to life in the classroom.  Find out how Fred the Preparedness Dog and Michael McNulty team up to teach kids how to stay safe and healthy when disaster strikes. Learn More >>

Author: ASPR/OPP Division of Policy and Strategic Planning
Published Date: 3/23/2017 11:23:00 AM
Category: National Health Security;
He’s been called “Fred’s driver.” He’s been called “that guy.” Michael McNulty, emergency operations director for the Kansas Department of Health and Environment (KDHE), says that’s OK because Fred the Preparedness Dog is the one spreading the message of safety and resilience.
After Fred, McNulty’s German Shepherd, took shelter in the bathtub on a stormy day in 2013, his owner gave him a backpack with emergency supplies and promoted a picture on social media. “Having worked in emergency preparedness for ten years, I saw something more in that picture: Fred was doing a good job at being prepared,” says McNulty. “The bathtub is where my family shelters when there are weather warnings in our area.”
So Fred, with some help from McNulty, started spreading the message on preparedness. Fred became so popular that he and McNulty now spend much of their time visiting schools, fairs, and other events to teach kids about preparedness and encourage them to take the message home. “They’ll go to their parents and say, ‘There was a dog at school today, and he had all this stuff. Why don’t we have stuff?’” McNulty says.
Fred made his first appearance in April 2013 at a preparedness event at the Topeka Collegiate School in Topeka, Kansas. As the official mascot for the Kansas Department of Health and Environment Preparedness Program, Fred’s work is aimed at getting both people and their pets prepared for severe weather and other types of emergencies. With additional funding from the CDC and resources such as coloring books, stickers, and a smartphone app, McNulty and the KDHE have been able to spread Fred’s message of preparedness planning across the state.
“Together, Fred and I travel to schools and events across Kansas, teaching kids how to keep themselves and their families safe,” says McNulty. “When we go to schools, kids help unpack the kit and see what’s inside. As they take out the items, we talk about each one: the flashlight, the maps, the contact numbers, the hand wipes, the first-aid kit, etc. We also talk about making sure family pets are accounted for in an emergency plan.”
As Fred’s owner, McNulty hopes that Fred can help demonstrate what goes into a severe weather preparedness kit for students and educate them on how to prepare for severe weather events. Thanks to the viral nature of social media, Fred’s work has turned into a state-wide preparedness campaign for all children between the ages of 6 and 12.
Fred the Preparedness Dog is just one way health departments are making emergency preparedness more accessible and fostering a culture in which people of all ages are mindful of their health and resilience. Such efforts to keep all people – and their furry friends -- safe before, during, and after a disaster are the cornerstone of national health security.
Even if you can’t meet Fred in person, you can check out the lessons on emergency preparedness that he is teaching to students and families. To learn more about Fred and the way that he gets students excited about emergency preparedness, check out his website at www.fredthepreparednessdog.org