The Costly Paradox of Health-Care Technology

In every industry but one, technology makes things better and cheaper. Why is it that innovation increases the cost of health care?

Health-care costs would drop if we stuck to technologies with proven benefits.

Part of our Business Report:

A Cure for Health-Care Costs

Health-care spending is out of control. Can technology save us money? 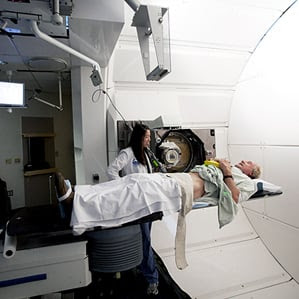 Big medicine: A patient is positioned to receive proton beam therapy at a facility in Boston. The devices use a beam of radiation to destroy cancer tissue.
As an economist who studies health care, I find it hard to know whether to welcome or fear new technology. Surgeons can replace a heart valve with a plastic and metal one that unfolds once threaded through arteries—repairs that used to be made by cracking open the chest. Customized cancer drugs hold the promise of making fatal diseases treatable. At the same time, it’s depressingly common to hear projections of fiscal Armageddon as health-care spending drags the U.S. federal government into debt and wipes out any wage growth for the average American. Even a recent slowdown in spending growth simply postpones the inevitable date when Medicare goes bankrupt.
It may surprise you to learn that economists agree on why the fiscal outlook for health care is so dismal: the cause is the continued development and diffusion of new technologies, whether it’s new drugs for treating depression, left-ventricular assistance devices, or implantable defibrillators.
Technology doesn’t raise prices in other parts of the economy. Improvements in computers provide better products at lower prices, and automobiles are an equally good example: after adjusting for consumer price inflation, my 1988 Volkswagen Jetta would have sold new for $22,600, more than the list price of a brand-new 2013 model. And I’d take the 2013 Jetta any day; it’s a much better car (my old Jetta lacked even a lap belt).
In research with Amitabh Chandra at Harvard’s Kennedy School of Government, funded by the National Institute on Aging, I have been puzzling over why advances in medical technology lead the U.S. to spend more per person on health care than any other country in the world (see “We Need a Moore’s Law for Medicine”). We came up with two basic causes. The first is a dizzying array of different treatments, some that provide enormous health value per dollar spent and some that provide little or no value. The second is a generous system of insurance (both private and public) that pays for any treatment that doesn’t obviously harm the patient, regardless of how effective it is.
We created three “bins” of treatments, sorted according to their health benefit per dollar of spending. The category with the greatest benefit includes low-cost antibiotics for bacterial infection, a cast for a simple fracture, or aspirin and beta blockers for heart attack patients. Not all treatments in this category are inexpensive. Antiretroviral drugs for people with HIV may cost $20,000 per year, but they are still a technology home run because they keep patients alive, year after year.
A second category of technology includes procedures whose benefits are substantial for some patients, but not all. Angioplasty, in which a metal stent is used to prop open blocked blood vessels in the heart, is very cost-effective for heart attack patients treated within the first 12 hours. But many more patients get the procedure even when the value for them is less clear. Because the U.S. health-care system compensates generously for angioplasty whether it’s used correctly or not, the average value of this innovation is driven toward zero.
A third category includes treatments whose benefits are small or supported by little scientific evidence. These include expensive surgical treatments like spinal fusion for back pain, proton-beam accelerators to treat prostate cancer, or aggressive treatments for an 85-year-old patient with advanced heart failure. The prevailing evidence suggests no known medical value for any of these compared with cheaper alternatives. Yet if a hospital builds a $150 million proton accelerator, it will have every incentive to use it as frequently as possible, damn the evidence. And hospitals are loading up on such technology; the number of proton-beam accelerators in the United States is increasingly rapidly. 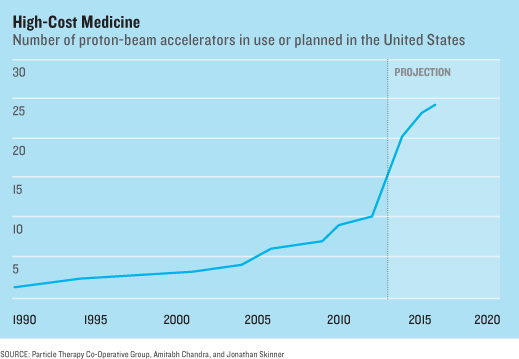 So it’s not just “technology” that is driving our rising health-care costs; it’s the type of technology that is developed, adopted, and then diffused through hospitals and doctor’s offices. Much of the increase in observed longevity is generated by the first category of treatments. Most of the spending growth is generated by the third category, which the U.S. health-care system is uniquely, and perversely, designed to encourage. Unlike many countries, the U.S. pays for nearly any technology (and at nearly any price) without regard to economic value. This is why, since 1980, health-care spending as a percentage of gross domestic product has grown nearly three times as rapidly in the United States as it has in other developed countries, while the nation has lagged behind in life-expectancy gains.
Other researchers have found that just 0.5 percent of studies on new medical technologies evaluated those that work just as well as existing ones but cost less. The nearly complete isolation of both physicians and patients from the actual prices paid for treatments ensures a barren ground for these types of ideas. Why should a patient, fully covered by health insurance, worry about whether that expensive hip implant is really any better than the alternative costing half as much? And for that matter, physicians rarely if ever know the cost of what they prescribe—and are often shocked when they do find out.
The implications for innovation policy are twofold. First, we should pay only for innovations that are worth it, but without shutting out the potential for shaky new ideas that might have long-term potential. Two physicians, Steven Pearson and Peter Bach, have suggested a middle ground, where Medicare would cover such innovations for, say, three years; then, if there is still no evidence of effectiveness, Medicare would revert to paying for the standard treatment. Like many rational ideas, this one may fall victim to the internecine political struggles in Washington, D.C., where it’s controversial to suggest denying even unproven treatments for dying patients.
For this reason, the best way technology can save costs is if it is used to better organize the health-care system. While the U.S. may lead the world in developing costly new orthopedic prostheses, we’re far behind in figuring out how to get treatments to patients who want and could actually benefit from them. Doing so requires a greater emphasis on organizational change, innovations in the science of health-care delivery, and transparent prices to provide the right encouragement. This means smartphone diagnostics, technology to help physicians and nurses deliver the highest-quality care, or even drug container caps with motion detectors that let a nurse know when the patient hasn’t taken the daily dose. The overall benefits from innovation in health-care delivery could far exceed those arising from dozens of shiny new medical devices.
Jonathan S. Skinner is James Freedman Presidential Professor in the department of economics, and a professor at the Dartmouth Institute for Health Policy & Clinical Practice at the Geisel School of Medicine, Dartmouth College.
Publicado por salud equitativa en 5:18