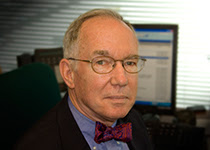 Charles Rothwell has been appointed Director of the National Center for Health Statistics (NCHS), the Nation's principal health statistics agency and a part of the Centers for Disease Control and Prevention (CDC). Mr. Rothwell succeeds Dr. Edward Sondik, who retired as NCHS Director in April, 2013. He becomes the Center's seventh director since its inception in 1960. At NCHS, Mr. Rothwell will direct a comprehensive program of statistical activities designed to monitor the health of the nation and produce the information needed for research, policy and programs.
Prior to becoming NCHS Director, Mr. Rothwell was Director of the NCHS Division of Vital Statistics and led a national effort to speed up mortality reporting using new automated systems that allow for real time surveillance. During his tenure at NCHS, Mr. Rothwell served as a Legislative Assistant for Senator Lieberman working primarily on health and education issues, worked with the National Science Foundation on NSF's Digital Government Initiative to build partnerships between academia and Federal statistical agencies, and served as a member of the IT Board of NIST's Advanced Technology Program. Mr. Rothwell came to NCHS in 1987 as the Associate Director of NCHS responsible for bringing new IT and data dissemination technologies to the agency. In February, 2013, Mr. Rothwell was selected from a field of 62 nominees as one of the five Top Leaders in Federal Service.
Earlier in his career, Mr. Rothwell worked in the State Health Department in North Carolina and founded the North Carolina State Center for Health Statistics. He served as an officer in the Marine Corps reaching the rank of Captain. He is a Fellow of the American Statistical Association and the 2011 recipient of the Hal Dunn Award in Biostatistics. Mr. Rothwell received his BS in Physics from the Virginia Military Institute, his MS in Operations Research and Systems Analysis from UNC and an MBA from University of Maryland.
Publicado por salud equitativa en 4:12