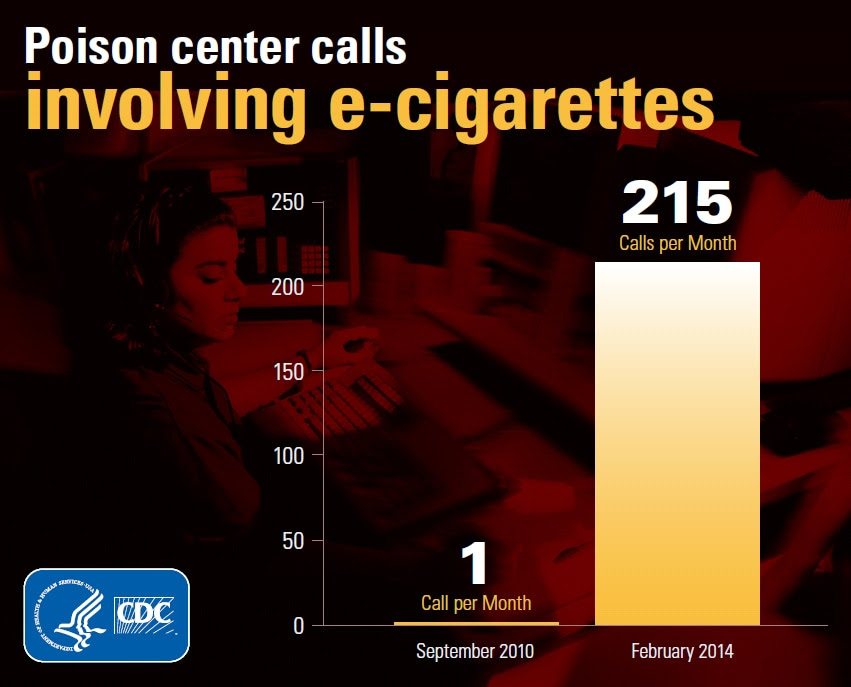 The number of calls to poison centers involving e-cigarette liquids containing nicotine rose from one per month in September 2010 to 215 per month in February 2014, according to a CDC study published in today’s Morbidity and Mortality Weekly Report. The number of calls per month involving conventional cigarettes did not show a similar increase during the same time period.
More than half (51.1 percent) of the calls to poison centers due to e-cigarettes involved young children under age 5, and about 42 percent of the poison calls involved people age 20 and older.
The analysis compared total monthly poison center calls involving e-cigarettes and conventional cigarettes, and found the proportion of e-cigarette calls jumped from 0.3 percent in September 2010 to 41.7 percent in February 2014.  Poisoning from conventional cigarettes is generally due to young children eating them. Poisoning related to e-cigarettes involves the liquid containing nicotine used in the devices and can occur in three ways: by ingestion, inhalation or absorption through the skin or eyes.
“This report raises another red flag about e-cigarettes – the liquid nicotine used in e-cigarettes can be hazardous,” said CDC Director Tom Frieden, M.D., M.P.H.  “Use of these products is skyrocketing and these poisonings will continue.  E-cigarette liquids as currently sold are a threat to small children because they are not required to be childproof, and they come in candy and fruit flavors that are appealing to children.”
E-cigarette calls were more likely than cigarette calls to include a report of an adverse health effect following exposure. The most common adverse health effects mentioned in e-cigarette calls were vomiting, nausea and eye irritation.
Data for this study came from the poison centers that serve the 50 states, the District of Columbia, and U.S. Territories. The study examined all calls reporting exposure to conventional cigarettes, e-cigarettes, or nicotine liquid used in e-cigarettes.  Poison centers reported 2,405 e-cigarette and 16,248 cigarette exposure calls from September 2010 to February 2014. The total number of poisoning cases is likely higher than reflected in this study, because not all exposures might have been reported to poison centers.
“The most recent National Youth Tobacco Survey showed e-cigarette use is growing fast, and now this report shows e-cigarette related poisonings are also increasing rapidly,” said Tim McAfee, M.D., M.P.H., Director of CDC’s Office on Smoking and Health.  “Health care providers, e-cigarette companies and distributors, and the general public need to be aware of this potential health risk from e-cigarettes.”
Developing strategies to monitor and prevent future poisonings is critical given the rapid increase in e-cigarette related poisonings. The report shows that e-cigarette liquids containing nicotine have the potential to cause immediate adverse health effects and represent an emerging public health concern.
###U.S. DEPARTMENT OF HEALTH AND HUMAN SERVICES
Publicado por salud equitativa en 10:32