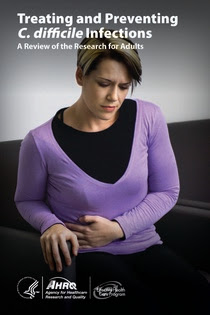 New evidence-based publications from AHRQ can help clinicians and patients make informed decisions about the diagnosis, prevention and treatment of Clostridium difficile infections (C. diff), a type of bacteria that infects the large intestine. Anyone can get C. diff, but risks may increase for people who have taken antibiotics in the past 30 days, have a weak immune system from an ongoing illness or have been in the hospital or a long-term care facility. Diagnosis, Prevention, and Treatment of C. difficile: Current State of the Evidence is a publication for clinicians that summarizes findings of an AHRQ-funded research review and identifies the strength of evidence supporting diagnostic tests, treatment options and prevention techniques. A companion plain-language publication, Treating and Preventing C. difficile Infections, can help patients and caregivers talk about C. diff treatment

Diagnosis, Prevention, and Treatment of C. difficile: Current State of the Evidence

Focus of This Summary

This is a summary of a systematic review that evaluated the recent evidence regarding the accuracy of diagnostic tests and the effectiveness of interventions for preventing and treating Clostridium difficile (C. difficile) infection. The systematic review included 93 articles published between 2010 and April 2015. This summary is provided to assist in informed clinical decisionmaking. However, reviews of evidence should not be construed to represent clinical recommendations or guidelines.

C. difficile is a Gram-positive, anaerobic, spore-forming bacterium generally acquired through ingestion. Symptoms of C. difficile infection (CDI) can range from mild diarrhea to severe conditions such as pseudomembranous colitis and toxic megacolon that can result in death. The estimated mortality rate for health care-associated CDI ranged from 2.4 to 8.9 deaths per 100,000 in 2011. For people ≥65 years of age, the mortality rate was 55.1 deaths per 100,000.
Effective containment and treatment of CDI depends on accurate and swift diagnosis. CDI is diagnosed using clinical findings and tests such as: (1) nucleic acid amplification using loop-mediated isothermal amplification (LAMP) and the polymerase chain reaction (PCR), (2) tests for disease- generating C. difficile toxins (including immunoassays), and (3) test algorithms (these are two-step procedures: the first step is a fast screen for the presence of the organism using a test such as the glutamate dehydrogenase [GDH] assay; if the first test is positive, a second test for toxins is performed).
Efforts to prevent CDI include antimicrobial stewardship, the use of infection-control strategies such as handwashing, and immune-boosting strategies. Antimicrobial stewardship is a coordinated program that promotes the appropriate use of antimicrobials to reduce microbial resistance and decrease the spread of infections. Handwashing with soap and water is helpful for removing C. difficile spores, which are resistant to alcohol rubs or hand sanitizer. Measures that improve a patient's immune defenses include the use of probiotics to promote healthy gut flora and the maintenance of balanced nutrition.
Initial treatment of CDI commonly involves the use of oral antimicrobials such as metronidazole and vancomycin. Mild to moderate initial CDI is often treated with metronidazole, while severe initial CDI is often treated with vancomycin. Treatment with metronidazole and vancomycin can be problematic, however, as they have been implicated in the development of vancomycin-resistant enterococci in immunocompromised patients.
CDI recurs in 15 to 35 percent of patients who have had one previous episode and in 33 to 65 percent of patients who have had more than two previous episodes. Diagnosis and treatment of relapsed or recurrent CDI are challenging. Diagnosis of recurrent CDI is based on the recurrence of clinical symptoms, and repeat testing may not be required. Currently, clinicians choose from a variety of antimicrobials, dosing protocols, and adjunctive treatments (such as probiotics and fecal microbiota transplantation [FMT]) to manage relapsed or recurrent CDI.
The current review aimed to update a 2011 review regarding the accuracy of CDI diagnostic tests and the effects of interventions to prevent and treat CDI in adults.

Diagnosis of CDI: Nucleic acid amplification tests have high sensitivity and specificity for diagnosing CDI (high strength of evidence [SOE]). (See Table 1.)
Prevention of CDI: Strategies such as antibiotic stewardship and handwashing campaigns may help prevent CDI (low SOE). Further evidence is needed to confirm that prevention strategies impact patient outcomes such as CDI incidence. (See Table 2.)
Treatment of CDI: Vancomycin is more effective than metronidazole for the initial treatment of CDI (high SOE), while fidaxomicin is more effective than vancomycin for the prevention of recurrent CDI (high SOE). Physicians may take into consideration disease and patient characteristics, effectiveness, potential adverse effects, patient preferences, and costs when choosing an antibiotic to treat CDI. Lactobacillus probiotics, when used as an adjunct to antibiotic therapy, may prevent the recurrence of CDI (low SOE); additionally, probiotics are generally safe in otherwise healthy patients. There is low SOE that FMT may be effective for treating recurrent and relapsed CDI; however, there is consistent positive evidence for its effectiveness in patients with recurrent and relapsed CDI. (See Tables 3, 4, and 5.)

Table 1: Summary of Key Findings and Strength of Evidence for the Accuracy of Diagnostic Tests for C. difficile Infection
Note: Diagnostic testing is recommended in patients in whom there is a suspicion of CDI based on symptoms and history. CDI is suspected in patients with symptoms of diarrhea (≥3 loose stools in 24 hours) or ileus who have additional risk factors (including use of antibiotics or antineoplastic agents in the previous 8 weeks, hospitalization, and older age). Clinicians should consider the possibility of CDI in hospitalized patients who have unexplained leukocytosis. Testing of stool from asymptomatic patients is not recommended. Testing for C. difficile or its toxins should be performed only on diarrheal (unformed) stool, unless ileus due to C. difficile is suspected.*

High confidence that the evidence reflects the true effect. Further research is very unlikely to change our confidence in the estimate of effect.
Moderate:

Evidence is either unavailable or does not permit a conclusion.
†† The overall evidence grade was assessed based on the ratings for the following domains: study limitations, directness, consistency, precision, and reporting bias. Other domains were considered, as appropriate: dose-response association, plausible confounding, and strength of association (i.e., magnitude of effect). For additional details on the methodology used to assess strength of evidence, please refer to: Owens DK, Lohr KN, Atkins D, et al. AHRQ series paper 5: grading the strength of a body of evidence when comparing medical interventions—Agency for Healthcare Research and Quality and the Effective Health-Care Program. J Clin Epidemiol. 2010 May;63(5):513-23. PMID: 19595577.
Table 6: Adverse Effects Associated With Interventions Used To Prevent and Treat C. difficile Infection
Note: The adverse effects listed here have been drawn from the systematic review and from U.S. Food and Drug Administration (FDA) labels.

Gaps in Knowledge and Additional Issues

What To Discuss With Your Patients and Their Caregivers