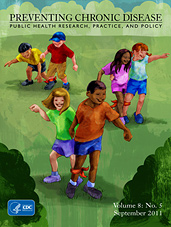 Introduction
Blacks have the highest incidence of and death from prostate cancer in the United States. Screening with prostate-specific antigen (PSA) may decrease mortality. Repeated testing allows for the calculation of PSA velocity (change of PSA over time), which may be a more clinically useful test for prostate cancer than a single PSA measurement. The objective of this study was to examine whether blacks were as likely as whites to report having had repeated PSA testing.

Methods
The Maryland Cancer Survey 2006 was a population-based, random-digit−dialed statewide survey on cancer screening and risk behaviors of adults aged 40 years or older. We analyzed self-reported information on repeated PSA testing (2 PSA tests in the preceding 3 years) for 1,721 black and white men. We used logistic regression to estimate the effect of race and age on repeated PSA testing, adjusting for other covariates.