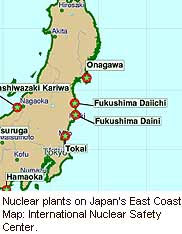 MONDAY, Aug. 15 (HealthDay News) -- New research finds that radiation from the nuclear plant accident in Japan in March reached California within days, showing how quickly air pollution can travel, but scientists say the radiation will not hurt people.

'It's not harmful at all,' said study author Antra Priyadarshi, a postdoctoral researcher at the University of California at San Diego. The value of the study, Priyadarshi said, is understanding how fast the tiny particles of radiation traveled and how many particles made it to the United States.

From March 13 to March 20, Japanese nuclear plant operators flooded a stricken and overheating reactor in Fukushima with seawater. The process created radioactive sulfur that was vented into the air in steam.

In California, researchers at UC San Diego's Scripps Institution of Oceanography track levels of sulfur. On March 28, several days after the flooding of the reactor in Japan, they found 'significantly higher' levels of sulfur in the air. The level was about two to three times normal, Priyadarshi said.

The researchers calculated that a bit less than 1 percent of the sulfur released in the air in Japan actually made it to the California coast. The rest of the sulfur in the air presumably landed on the ocean, she said.

The statistic about the amount of sulfur that actually made it across the Pacific Ocean is important, she said. Scientists have previously been able to track pollution from Asia, but it hasn't been possible to specifically determine how much actually makes it to the West Coast and how much is lost along the way, she said.

The stricken nuclear plant allowed a unique type of calculation because researchers were able to determine exactly how much sulfur was released.

The findings fit in with previous research that suggested less than 1 percent of pollution survives the trip across the ocean from Asia and lands in the air here, she said. Priyadarshi and other researchers, including some in Japan, next want to analyze radiation in seawater. The amount along the West Coast is expected to be small, she said.

So, is the radiation in the air harmful? Not in this case, since the amount is small and the spike in radiation didn't last long, said Eleanor Blakely, a scientist at Lawrence Berkeley National Laboratory.

The radioactive sulfur in question is more harmful through internal exposure, such as when it's eaten, than when people are exposed to it on their skin, explained Dr. Kory Gill, an assistant professor at Texas A&M Health Science Center College of Medicine. 'The concern here, however, would be if these radioactive elements were in the water and atmosphere at higher than originally thought levels,' Gill said, since that could expose people to radiation through food and water.

Authorities reported last spring that they'd found radiation from Japan in milk in California and Washington state, but there's such a tiny amount that it's thought to be extremely far from posing a health risk.

The new study appears in this week's online edition of the Proceedings of the National Academy of Sciences.