Opioid exposure during pregnancy increases risk of some birth defects 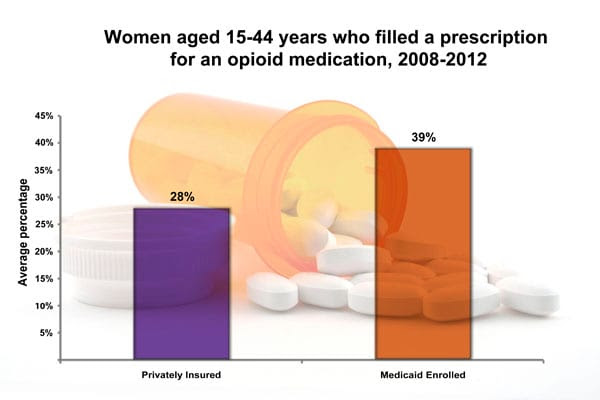 More than a third of reproductive-aged women enrolled in Medicaid, and more than a quarter of those with private insurance, filled a prescription for an opioid pain medication each year during 2008-2012, according to a report in this week’s Morbidity and Mortality Weekly Report (MMWR).
Opioids are typically prescribed by health care providers to treat moderate to severe pain.  They are also found in some prescription cough medications. The most commonly prescribed opioids among both groups of women were hydrocodone, codeine and oxycodone.
“Taking opioid medications early in pregnancy can cause birth defects and serious problems for the infant and the mother,” said CDC Director Tom Frieden, M.D., M.P.H.  “Many women of reproductive age are taking these medicines and may not know they are pregnant and therefore may be unknowingly exposing their unborn child.  That’s why it’s critical for health care professionals to take a thorough health assessment before prescribing these medicines to women of reproductive age.”
CDC researchers analyzed 2008-2012 data from two large health insurance claims datasets: one of women aged 15-44 years with private insurance and another of women in the same age group enrolled in Medicaid.  They found that, on average, 39 percent of Medicaid-enrolled women filled an opioid prescription from an outpatient pharmacy each year compared to 28 percent of women with private health insurance.
The higher opioid prescribing rates among Medicaid enrollees might be due to differences in the prescription medications covered under their health insurance plan, differences in use of health care services, or differences in the prevalence of underlying health conditions among Medicaid enrollees compared with persons covered by private health insurance.
Geographic region data available in the private insurance claims indicated that opioid prescription rates were highest among reproductive-aged women in the South and lowest in the Northeast.  Race/ethnicity information was available for the Medicaid data and indicated opioid prescriptions were nearly one and a half times higher among non-Hispanic white women of reproductive age compared to non-Hispanic black or Hispanic women.
Previous studies of opioid use in pregnancy suggest these medications might increase the risk of neural tube defects (major defects of the baby’s brain and spine), congenital heart defects and gastroschisis (a defect of the baby’s abdominal wall).  There is also a risk of neonatal abstinence syndrome (NAS) from exposure to medications such as opioids in pregnancy.  NAS is when a newborn experiences symptoms of withdrawal from medications or drugs taken by a mother during pregnancy.
“Women, who are pregnant, or planning to become pregnant, should discuss with their health care professional the risks and benefits for any medication they are taking or considering.” said Coleen Boyle, Ph.D., MS.Hyg., Director of CDC’s National Center on Birth Defects and Developmental Disabilities. “This new information underscores the importance of responsible prescribing, especially of opioids, for women of child bearing age.”
CDC’s National Center on Birth Defects and Developmental Disabilities is working to provide better information to women and their health care providers about medication use during pregnancy through its Treating for Two: Safer Medication Use in Pregnancy initiative.  Through Treating for Two, CDC is working with its partners, other federal agencies and the public to understand trends in medication use among pregnant women and women of childbearing age and to provide women and health care providers with information about the safety or risk of using specific medications during pregnancy.  This information will help women and their healthcare providers to make informed decisions about treating health conditions during pregnancy.
For more information about medications and pregnancy, visit www.cdc.gov/pregnancymedication or www.cdc.gov/treatingfortwo.  To learn more about CDC’s work on birth defects, visit www.cdc.gov/ncbddd/birthdefects/.
###
U.S. DEPARTMENT OF HEALTH AND HUMAN SERVICES
Publicado por salud equitativa en 3:39