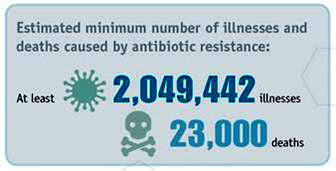 The Centers for Disease Control and Prevention (CDC) estimates that each year at least two million illnesses and 23,000 deaths are caused by antibiotic resistant bacteria in the U.S. alone. Antibiotic resistance limits our ability to quickly and reliably treat bacterial infections, and could hamper our ability to perform modern medical procedures. In addition, resistant infections account for $20 to $35 billion in excess direct health care costs and up to $35 billion in lost productivity due to hospitalizations and sick days each year.


In September 2014, President Obama signed an Executive Order launching Federal efforts to combat the rise in antibiotic-resistant bacteria. The Administration also issued its National Strategy on Combating Antibiotic-Resistant Bacteria (CARB), and the President’s Council of Advisors on Science and Technology released a report with actionable steps for controlling the antibiotic-resistance crisis. The President’s FY 2016 Budget submission builds on recent efforts and holds the potential to:
The proposed investments will lead to critical new interventions that could transform how public health prevents the transmission and emergence of antibiotic resistant infections.
Publicado por salud equitativa en 4:20