West Nile Virus
A single mosquito bite can give you West Nile virus. Why take a chance? Use repellent on yourself and your family.

Some of what happens in life is luck. Many people who are bitten by an infected mosquito won't get sick—many others aren't as lucky. More than 30,000 people in the US have been reported with West Nile virus disease since 1999, and of those almost 13,000 have been seriously ill and over 1,200 have died. Many more cases of illness are not reported to CDC, but it's likely that more than 300,000 people from almost every state have been sickened in the 12 years since West Nile virus came to the US. The older you are, the more likely that you could get severely ill if you get infected. People who have ever received an organ transplant also seem to be at higher risk for severe disease. The reasons one person becomes severely ill and another doesn't aren't entirely known.

Control what you can. Improve your odds of avoiding West Nile and other mosquito spread viruses by using a repellent on exposed skin and clothes while outdoors.

Insect Repellent: Who, What, When, Where and Why
There are always excuses for not using repellent— forgot it, didn't want to go back and get it, it doesn't smell good, it's not in the budget, "mosquitoes don't bite me"…

There are facts or a counter argument for every excuse, but here's the best reason to go ahead and use repellents —to avoid getting sick from West Nile virus, this is a part of the equation you can help to control. Avoid the weeks (or even months) of aches and fatigue that come with West Nile fever, the more severe problems of being hospitalized with swelling of the brain or an even worse outcome.

What repellent should I use? CDC recommends a variety of effective repellents. The most important step is to pick one and use it. There are those that can protect you for a short while in the backyard or a long while in the woods. DEET, picaridin, IR3535 and the plant-based oil of lemon eucalyptus are all repellents recommended by CDC. All contain an EPA-registered active ingredient and have been evaluated for efficacy and safety. EPA has a long listing of every repellent brand in the US. There are good repellents for every budget, age and preference. Excuse gone.

When should you wear repellent? Mosquitoes can bite anytime. Most of those that carry West Nile virus bite from around sundown to around sun-up (throughout the night). Put a few bottles or packets of repellent around—in the car, by the door, in your bag. Make it easy. 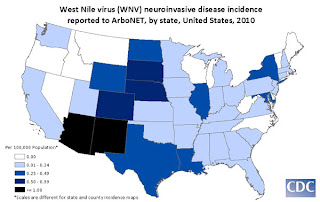 Incidence by state map data description: West Nile virus neuroinvasive disease incidence maps reflect surveillance reports released by state and local health departments to CDC's ArboNET system for public distribution. Map shows the incidence of human neuroinvasive disease (encephalitis, and/or meningitis, and/or acute flaccid paralysis) by state for 2010 with shading ranging from .01 to 0.24, 0.25 to 0.49, 0.50 to 0.99, and greater than 1.0 per 100,000 population.

Where is West Nile virus a problem? Almost all of the continental US has had human West Nile virus cases. Some states, such as those with the darkest shades of blue on the map to the right, had greater concentrations of cases of severe disease than others represented in lighter colors in 2010. This can change each year. Some areas of the US are affected by other viruses such as eastern equine encephalitis virus, LaCrosse encephalitis virus and dengue.

What about mosquito control in my town/county? Integrated mosquito management helps reduce the number of mosquitoes, especially those that can carry disease. This is a crucial part of reducing the risk to humans. Mosquito control won't get rid of every last mosquito, but combined with repellent use one can markedly reduce the chances of getting bitten. Ask local officials about starting mosquito control in your city or county if it doesn't exist already.