This week, like many families hitting the road for the Thanksgiving holiday, I’m headed home. But today, I made a very important stop before I got there.
As you’ve probably heard, there’s been a lot going on in Washington this month. People are talking about the future of the Affordable Care Act and health care in America. Very soon, Congress will face a choice: Build on the progress we’ve made, or take back the protections and advancements that people depend on.
Too often, what gets covered is politics. That’s where the conflict is, and it’s simpler to cover arguments than what policies mean for everyday people. The real impact of the law is lost to some abstract debate that’s filled with a lot of heat but very little light.
But beyond Capitol Hill, there are many millions of Americans who live the reality of the Affordable Care Act every day – Americans with their own stories to tell. They don’t want to go back to the world as it was before the ACA.
They’re the 20 million Americans who have coverage thanks to the law. The millions of young adults who have been able to stay on their parents’ plans. The tens of millions of women who have gotten coverage for contraception at no out-of-pocket cost. And the more than 120 million Americans who have pre-existing conditions – cancer survivors, people with diabetes, even people with asthma – who can no longer be locked out of coverage.
So today I joined a roundtable discussion at the University of Charleston in my home state of West Virginia. We heard some of the stories of Americans whose health depends on the Affordable Care Act. We gave them the chance to say how access to affordable, quality coverage has changed their lives.
And we’re counting on you to be a part of this conversation.
Today, our Department is launching a new campaign to help you tell us what health coverage means for you and your loved ones. Tell us your story on Twitter, Facebook and Instagram using the hashtag #CoverageMatters. 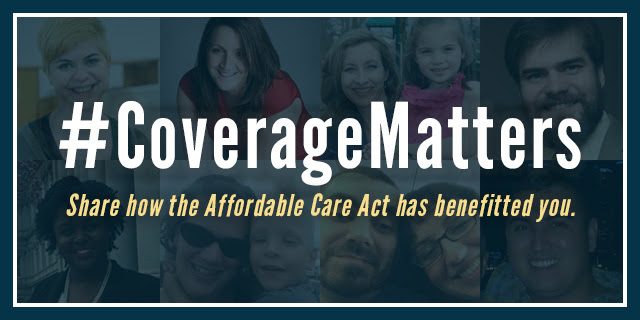 Maybe coverage means you finally got that check-up you’ve been putting off. Maybe it means you could breathe a little easier because your daughter and grandson are now covered by Medicaid. Maybe it means your father can save some money on his prescription drugs, since the Affordable Care Act began closing the Medicare Part D “donut hole.” Or maybe it means you could finally take that business idea and run with it, knowing that you weren’t tied to a job just to stay covered.
Or maybe, if you’re like Mina Richards Schultz, coverage saved your life.
When Mina wrapped up her graduate studies, she planned to serve as a member of the Peace Corps. But for the six months in between, she would be uninsured. Fortunately, the Affordable Care Act would let her stay on her parents’ plan until she turned 26. She didn’t think she’d need health insurance, but she signed up anyway.
That’s when the pain in her knee started. At first, the doctors thought it was a sprain. When it didn’t go away, an MRI showed that she had bone cancer. Luckily, thanks to the ACA, she was covered. Mina got the care she needed to fight her cancer, and five years later, she’s healthy.
Because of the law, coverage was there for her. When she was too old to stay on her parents’ plan, she got coverage the old fashioned way – searching frantically for a job to stay covered. But then the Health Insurance Marketplace opened, and Mina could shop around for her own coverage on HealthCare.gov. Thanks to the law, no insurance company could turn her down because of her pre-existing condition.
Today, Mina works as an application counselor to help other people get covered. Because she knows firsthand how important it is to have health care when you need it.
Mina says she’s scared about what the future holds for the ACA because if the law goes away, she doesn’t know how she’ll stay covered. I know there are many Americans who feel the same way. I’ve had the chance to meet a lot of these folks as Secretary – people who depend on care that’s there when they need it, so they can live healthy, productive lives.
But we don’t have time to be scared. We have to speak up.
The Affordable Care Act is part of the fabric of our nation, and it’s the law of the land.
And with #CoverageMatters, you can make your voice heard, and join the voices of Americans in small towns and cities across the country. Share this blog. Share the hashtag with your friends and family. Together, let’s tell all of America why #CoverageMatters.
Publicado por salud equitativa en 3:15