MercatorNet: Modelling Down syndrome: how advertisers are responding to a cause

MercatorNet: Modelling Down syndrome: how advertisers are responding to a cause

Modelling Down syndrome: how advertisers are responding to a cause

With a bit of help from millennials and moms. 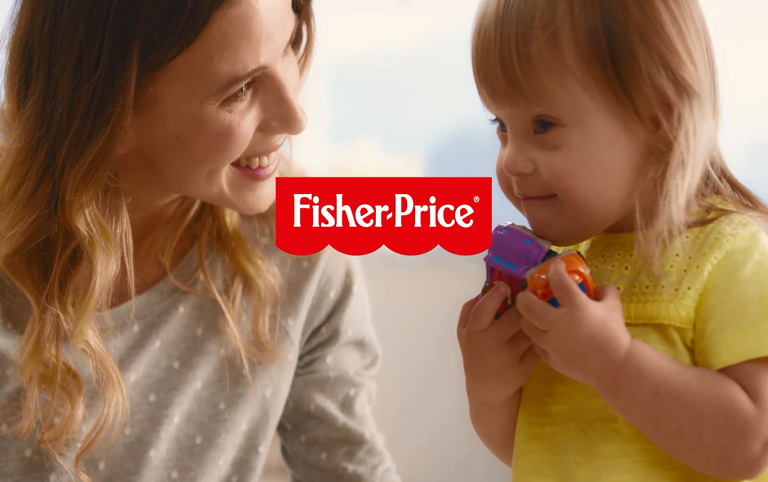 Lili Boglarka Havasi in a Fisher-Price commercial. via NYTimes

In an era that celebrates diversity, you never know who is going to make a very public appearance next. Enter little children with Down syndrome, modelling toys and clothes for popular US brands. Lili, a 2-year-old from Budapest, appears in a new commercial for a Fisher-Price toy, and 15-month-old Asher will soon be modelling for the OshKosh children’s clothing line.
These two little stars, who feature in an article on the New York Times’ Well blog this week, signal a certain momentum in a trend that has seen people with Down syndrome appearing on at least one TV show and more recently on New York catwalks and in ads for Target, McDonald’s and other brands.
In terms of visibility and recognition of people with Down syndrome, this is a welcome development. The assumption on the part of advertisers that their market will react favourably to models with the features associated with the condition (especially, cute little kids) is encouraging at a time when mothers carrying babies diagnosed with Down syndrome find themselves under pressure from doctors to terminate – and in the US around 30 percent do.
Does the advertising trend mean that attitudes to this disability are softening?
Perhaps, but not across the board.
Last month British television actress Sally Phillips, who has a son with Down syndrome, presented a documentary on the BBC called A World Without Down’s Syndrome? In the programme she stressed the positive qualities and potential of people with the condition and made the case against the introduction of a new pregnancy screening test that would detect with 99 percent accuracy the fetal abnormalities indicating the syndrome – and seems likely to increase the rate of abortions.
Not everyone was happy. Jane Fisher, director of Antenatal Results and Choices, an organisation set up to support parents affected by foetal screening and its consequences, said she thought the programme – in which she is interviewed – was “not at all helpful” to people facing difficult decisions around a prenatal diagnosis of disability. She worried that Ms Phillips’ optimistic take on Down syndrome risked suggesting to those who had decided to end a pregnancy “that they have made a wrong decision.”
With a pessimism that seems all too prevalent in the developed world, she added:

“Not only does no one know how their child would be affected by Down’s, but the big conflict for women is the adult the child will be 20 or 30 years down the line. For most women, that is the bit that tips them to end the pregnancy. An adult who will be, at best, vulnerable.”

Defending that attitude to disability – especially one that is often mild – is becoming more difficult in the face of identity politics and the emergence of diversity as a social value. People with Down syndrome are a relatively small part of the population – according to a recent study about 5300 are born each year in the US, and there were about 250,700 living there in 2008 – but minority rights do not depend on numbers, as the explosion in gender identities has taught us.
Advertisers told The Times that “using models with Down Syndrome or a physical disability allows them to communicate their values and connect with customers, particularly millennials, who respond to inclusiveness and are looking for ‘authenticity’ in advertising.”
Some other comments on the Times article were sceptical about commercial motives and the exploitation of people with disabilities, especially children, but on the whole they approved. As one put it:

“Watching many years of television with more and more LGBTQ people represented can be argued that it helped with the struggle for equal rights. One can wonder whether this new tack in advertising will lead to more prominence and rights\benefits for the families in need. I hope so.”

There is another factor, however, in what we might tentatively call the rise of Down syndrome, and that is activism on the part of educated, middle class parents who have children with the syndrome. Sally Phillips is one example. And as marriage and childbearing are delayed, there are more of them, since age is the main risk factor for Down syndrome.
The Times informs us about a US group called Changing the Face of Beauty, which last year set out to find 15 retailers to commit to using models with disabilities in their advertisements – and wound up getting commitments from more than 100 companies. The group’s leader, Katie Driscoll of Chicago, who has a 7-year-old daughter with Down syndrome, said they focus on what a smart business decision it is: “You are essentially leaving a lot of money on the table, otherwise.”
Meagan Nash, the mother of the baby boy who is modelling for OshKosh, took to Facebook after a talent company initially turned him down and the story went viral.
These parents are proud of their special children and have been organising and advocating for them for some considerable time; and their attitude is not exceptional.
In groundbreaking research five years ago involving 2000 parents or guardians, more than 800 siblings and 248 people with Down syndrome, Dr Brian Skotko, then at Boston Children’s Hospital, found that all three groups reported positive feelings. Parents/guardians and siblings overwhelmingly expressed love and pride for their family member, while almost all of those with Down syndrome were happy with many aspects of their lives.
Dr Skotko, who has a sister with Down syndrome, is now co-director of the Down Syndrome Program at Massachusetts General Hospital and an assistant professor of Pediatrics at Harvard Medical School. With other members of his team he recently reanalysed the data from his earlier studies to see if attitudes differed within families. The result:

What this shows, says Dr Skotko, is the resiliency of most families and their ability to translate their circumstances into “meaningful life journeys.” That some face particularly challenging medical or behavioural issues is undeniable, says Dr Skotko, but he hopes that the research will help paediatricians identify those families so that proper supports and resources can be put in place.
If that happens, and the commercial world does its part, we may hope to see more parents having the confidence to accept a child with Down syndrome – or any other disability – and experience the mysterious joy that so many other families have found in responding to their special needs and gifts.
Carolyn Moynihan is deputy editor of MercatorNet.

Apologies for this late newsletter. A gremlin got in the works late yesterday and it could not be sent. Please enjoy our new articles and have a pleasant weekend.