Malaria occurs mostly in poor, tropical and subtropical areas of the world. 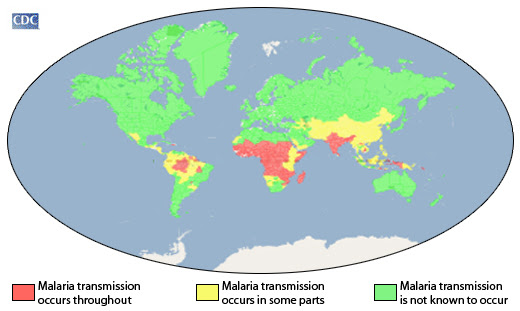 This map shows an approximation of the parts of the world where malaria transmission occurs.
Africa is the most affected due to a combination of factors:
In other areas of the world malaria is a less prominent cause of deaths, but can cause substantial disease and incapacitation, especially in rural areas of some countries in South America and South Asia.

Malaria is one of the most severe public health problems worldwide. It is a leading cause of death and disease in many developing countries, where young children and pregnant women are the groups most affected. According to the World Health Organization’s World Malaria Report 2009

and the Global Malaria Action Plan 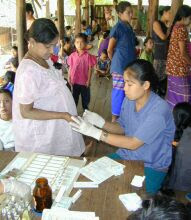 Pregnant woman having a blood smear taken at an antenatal clinic at the Maela Camp in Thailand near the Burmese Border. Pregnant women are at increased risk of malaria. Image contributed by the Shoklo Malaria Research Unit

Who Is Most Vulnerable?

Persons most vulnerable are those with no or little immunity against the disease. In areas with high transmission (such as Africa south of the Sahara), the most vulnerable groups are:
In areas with lower transmission (such as Latin America and Asia), residents are less frequently infected. Many persons may reach adult age without having built protective immunity and are thus susceptible to the disease.

Malaria imposes substantial costs to both individuals and governments.
Costs to individuals and their families include: purchase of drugs for treating malaria at home; expenses for travel to, and treatment at, dispensaries and clinics; lost days of work; absence from school; expenses for preventive measures; expenses for burial in case of deaths.
Costs to governments include: maintenance of health facilities; purchase of drugs and supplies; public health interventions against malaria, such as insecticide spraying or distribution of insecticide-treated bed nets; lost days of work with resulting loss of income; and lost opportunities for joint economic ventures and tourism.
Direct costs (for example, illness, treatment, premature death) have been estimated to be at least US$ 12 billion per year. The costs are many times more than that in lost economic growth.